“Movement” is a mechanical action. However, Wellness Through Movement (WTM) uses movement disorders to improve cognitive disorders. The sense of movement isn’t just related to cognition; it is cognition. (Scientific America Mind, 2011).

WELLNESS THROUGH MOVEMENT strategies in children changes everything, dramatically. Organize movement, and the sense of self, perception, and social-emotional behavior improve.Resources

Here’s how it works 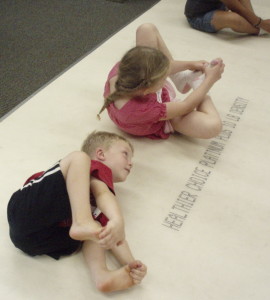 The program’s primary focus of our strategies for movement programs is to support and enrich learning, regardless of mental or physical condition.  The secondary focus introduces “Body Ownership.”  Body Ownership  teaches the awareness of sensations in movement patterns. In children, these sensations can be elusive to the mind yet direct their behaviors.

Children’s minds, not yet culturally conditioned, have the vulnerable and courageous innocence that opens the doors to the compulsive and biological cravings of motor patterns.

Learning Body Ownership, the awareness of the body-mind, is one way to feel the physicalness that animates intention. An action doesn’t always follow intention. With Body Ownership, movement is no longer a mechanical appendage of the brain but a person who knows and does what he/she intends.

Wellness Through Movement® brings together contemporary cognitive science, children, and movement that changes everything in life.

When motor patterns to cognitive orders were detected and reeducated behavior improved  within 24- 48 hours, EVERY TIME!